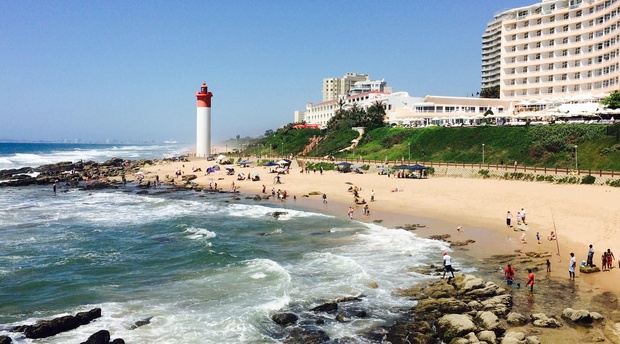 “Umhlanga Rocks is the jewel of the Kwazulu Natal Coastline and is one of the most sought after holiday destinations in South Africa, whilst still retaining its unique seaside village appeal”

“If you are looking for a holiday at any time of the year, Umhlanga Rocks is definitely first choice”

The facilities offered in Umhlanga Rocks are exceptional. You are spoilt for choice with a variety of restaurants, bars, coffee shops and supermarkets within easy and safe walking distance of the apartment. There are numerous venues in the immediate vicinity where one can enjoy ten pin bowling, dodgem cars, game arcades etc.

For the water enthusiasts there is deep sea fishing, scuba diving, surfing or just relaxing on the Blue Flag beaches that are on offer along the Kwazulu Natal Coastline. The award winning pier that is shaped like the ribcage of a whale recently won the award for the “Best Pier in the World”

There are several world class golf courses in the immediate vicinity of Umhlanga Rocks. 203 Oyster Quays is just a five minute drive from Gateway Theatre of Shopping, the largest shopping and entertainment centre in the Southern Hemisphere. The International Conference Centre (I.C.C.) is a mere 15 minute drive from Umhlanga Rocks and the Sibaya Casino is 5 minutes up the road from the apartment.

Ushaka Marine World is rated as one of the top aquariums in the world and is a 20 minute drive away from Umhlanga. Take a ride on the cable car to the top of the arch over the Moses Mabhida Stadium (home of the 2010 Football World Cup) and enjoy the fabulous views over Durban and the entire coastline as far as the eye can see. Umhlanga Lagoon Reserve Nature Trails – Guided nature walks – Enjoy the beauty of the forest and the thrill of crossing the lagoon over wooden bridges. The Hawaan Forest is a pristine dry coastal forest that is rich in biodiversity.

There are numerous activities in and around Umhlanga.